Do you suffer from poor body image? 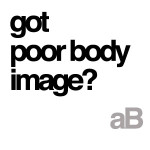 When a person suffers from poor body self image, the first thing they do is judge themself against everyone else. There’s a difference between a healthy competition and personal assault. When we judge ourselves against others, we judge our warts and all and magnify our so-called negative traits. With this magnification we are comparing ourselves to people who we see as having no flaws. The scale is extremely unbalanced because we aren’t judging ourself and others fairly.

We magnify our perceived negative attributes and overplay them and at the same time we’re putting others on a pedestal. Think about it. When we see another person with the looks we want, we usually don’t take a deep honest look; we look quickly, and then go back home and get up close and personal when it comes to ourselves.
For the ladies, have ever gone out on the town and see a woman that has the most beautiful lashes, they’re so long you could use them for ribbon-or hair so thick and full that it goes down to her butt? You’ve had the tiniest lashes-they would never grow or your hair has always been fine or thin and you can’t grow it longer than your shoulders? You look at her and see her as an angel who fell from heaven and you are the miserable idiot that she fell on.

Now for the men, for every man reading this blog, you either have hair or have hair envy. There are a few of you who argue up and down that you wanted a baldhead and the last time you had hair, it was thick and full. For the ladies, you have no idea if the lashes, the woman you admired and compared yours too, are real, you have no idea if the hair is real or extensions, and for the men no idea if it’s hair plugs, a hairpiece, or real. Does the reality matter?

Why? It can’t matter because you haven’t allowed reality to play even the smallest of parts in any of these so-called comparisons. Comparisons are supposed to be used to compare two things or situations that are similar with all of the facts. We use comparisons when we are looking at buying a car. Think about it. When we look at different cars we compare them usually at a similar facility i.e.: a car dealership. Both cars are washed and clean. One car isn’t washed and the other covered in mud. You’re not looking at one in pitch darkness and the other at high noon. The way we compare ourselves to others is ludicrous. We are extremely hard on ourselves and see the other person with the “Barbara Walters” soft lens. We are quick to be upset and angry with ourself and see others as having it all together. When we have a poor body self image we see all others as having a better body, more beautiful, and with none of the drawbacks.

3 Ways to
Slow your Judge:

A few weeks, Perspectives discussed how to deal with poor body image and still stay active on social media: https://www.ashleyberges.com/radioshow/do-you-have-poor-body-self-image/