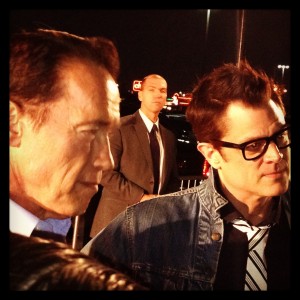 The Last Stand with Arnold Schwarzenegger and Johnny Knoxville captivated the American audience.  I arrived at the press only premiere, expecting a certain type of film.  I figured it was going to be violent with the possibility of no reason.  Expecting the need to take some breaks to breathe, I prepared myself for anything and everything.  In the beginning, I turned away from the screen several times in an attempt to isolate my view of violent actions and behaviors.  I was successful, however I was enjoying the film.  I caught myself turning away now and again due to some graphic details but ultimately turning back to watch again.

Arnold Schwarzenegger plays Sheriff Ray Owens who went from being a narcotics agent in Los Angeles to giving it all up and moving to a sleepy border town in Arizona.  Johnny Knoxville plays a character by the name of Lewis Dinkum.  Lewis owns a gun arsenal like no other and lives in the small town.  Lewis has a museum permit for his guns and arsenal and uses that as a career.  In the beginning of the film we see Lewis and a few of the local law enforcement shooting a side of beef.  The audience quickly surmises that nothing goes on in this town.  When Ray Owens drives into the scene, we realize quickly that he takes his job seriously.  No matter the job, big or small, he is going to do it with meticulous detail and respect for the badge.

Gabriel Cortez plays the quintessential bad guy, the one you hate to love.  I found his portrayal both sexy and despising.  He is the man that has all others working for him except Owens and his men and one woman.  At this time, some of you haven’t seen the film so I will jump to the Red Carpet Premiere.  Meeting Arnold Schwarzenegger, Johnny Knoxville, Michael Madsen, and Billy Blair is a star-studded experience lending itself to authentic interviews and perspectives. 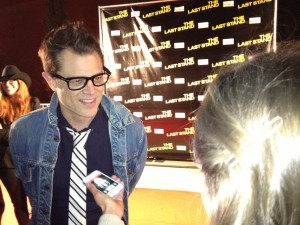 Talking with Michael Madsen is a wonderful experience because of his talent and his definite outgoing personality.  I also appreciate the way he changes his look so drastically from one project to another.  Billy Blair is both independent and has his own look.  All four actors are brilliant and captivating in their own right and I’m thrilled to make this a memory. 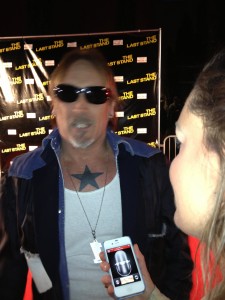 I will continue to air the Red Carpet Premiere interviews on my radio show, Perspectives with Ashley Berges.  Perspectives airs live every Sunday from 8-9 PM CST, on 570KLIF and you can find that on iheart radio at: http://www.iheart.com/live/570AM-KLIF-5527/ 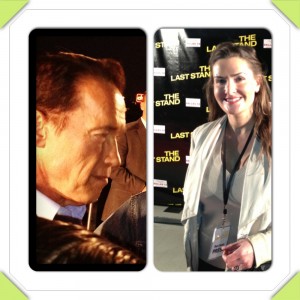